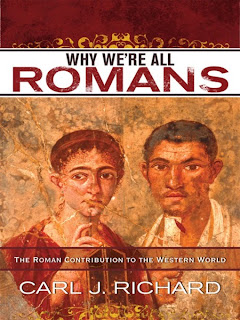 In our intellectual lives we are Greeks, in our spiritual lives Hebrews. Or so the claim is made when speaking of the Western tradition owed to the Ancients. Carl J. Richard agrees with these assessments, but adds that it was the Roman Empire which filtered and facilitated both the Greek and Hebrew legacies to the nations of the West. Along the way Rome managed to add its own native embellishments to the tapestry of history. Richard provides a decent enough overview of The Eternal City's contributions to posterity.

Carl J. Richard is professor of history at the University of Louisiana at Lafayette, and received his Ph.D. from Vanderbilt. He has written numerous books on the impact of Greco-Roman civilization on history, particularly on American history. His prior research and conclusions appear frequently in this work; and much is made of how the Greco-Roman literati influenced the American Founding Fathers. This may not interest those outside the States (or even within). However, the classical legacy's impact on figures throughout European history is also showcased and thus provides a broader view. The author is also a confessed Christian. While I don't think any strong bias shows through on his chapters on religion, he treats Christianity and its triumph as a given rather than an historical aberration, which may annoy those with more atheistic tendencies or pagan sympathies.

Chapter one offers an outline of Roman history and culture, which is highly serviceable and competent with one exception: it largely ignores the later empire. This is strange given the Christianization of the later empire, and the part it plays in Richard's last chapter on the Romanization of Christianity.

The study of the Roman legacy begins with chapter 2, which focuses on law and administration. It was in this capacity that the practical, precise and prudent Romans were able to truly bequeath something new to the world. Conquerors like Alexander had captured large holdings of territory without much thought as to how to rule it after the battle was over. The Romans, by contrast, exercised a facility in legal and political matters that ensured their Mediterranean empire would lay intact for centuries. Roman law is still the basis of many Western legal codes. Chapter 3 focuses on engineering and architecture, and there too the Romans, while working off a Greco-Etruscan base, managed to innovate through the use of the arch and concrete.

Chapters 4 through 8 examine Roman accomplishments in letters and writing. In the area of philosophy, Romans managed to distill Greek philosophy from its abstract metaphysical heights into a practical concern for law and ethics. With poetry, history, speeches and plays, the Romans breathed fresh air into old Hellenistic forms, managing to equal or exceed the originals in many cases. In fact, given that many of the Hellenistic originals were ultimately lost, sometimes we know a Greek genre only through its Roman imitations.

Chapter 9 examines Greek and Jewish contributions to Rome during the Roman age. Much of "Roman" art was actually produced by agents of Greek-speaking lands. Furthermore, with the Romans dominating the practical sciences, it was left to Greeks like Galen and Ptolemy to make discoveries in the purely natural sciences. Meanwhile, Josephus the historian is our main source on Jews during this time period.

The last chapter details the interplay between Christianity and Rome: as Rome became more Christian so too did Christianity become more Roman. It was a Jewish Roman citizen, Saul of Tarsus, who rescued Christianity from a marginal and heretical Jewish sect; by severing Christianity from Jewish law and making it a matter of personal salvation, Christianity was easily marketed to Gentiles (especially to women and the urban poor who had the most to gain and the least to lose from a Messianic new religion). As the Church grew in converts it assimilated rather than destroyed many elements of paganism.

Why We're All Romans is a decent enough read on the classical intellectual legacy. Chapters usually begin by highlighting Greek precursors, then moving on to the Roman contributions, and concluding with its impact on European and American civilization. The prose is engaging enough, and a few obligatory maps and photographs are included. Not included, which I find a major detraction and quite an astonishing omission in a scholarly work, are citations. There are no footnotes or endnotes of primary references used, and so one cannot check the author's purported facts. Therefore this book honestly doesn't belong in a university where further research and academic veracity are required; however, it might be effective in a public library for the general audience.